We celebrated my little girl’s first birthday at the end of May with a pink, blue and green extravaganza of cupcakes.  When I was first pregnant with Keira, I told my sister I would prefer to have a second boy, but I am so happy we ended up with one of each.  Girls parties are a lot of fun!

I started by designing the invitation with a cute cupcake graphic and a pink, green and blue chevron print to match a pennant banner I had ordered several months earlier. 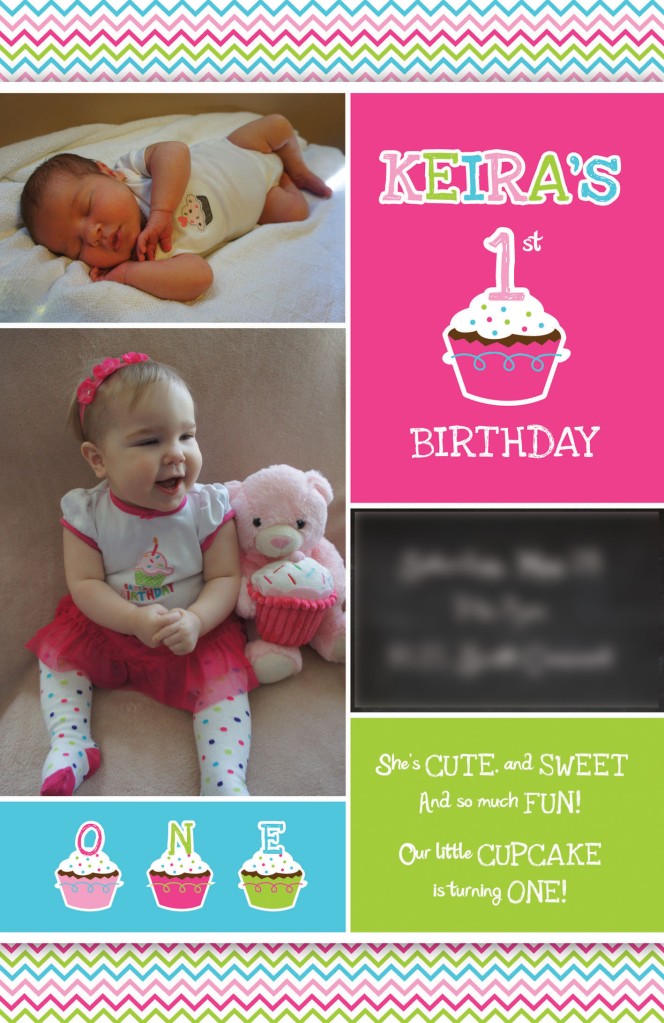 I carried the same cupcake image from the card onto the drink and cup labels.  You can also see the chevron banner below that I dolled up with cupcakes I cut from scrapbook paper. 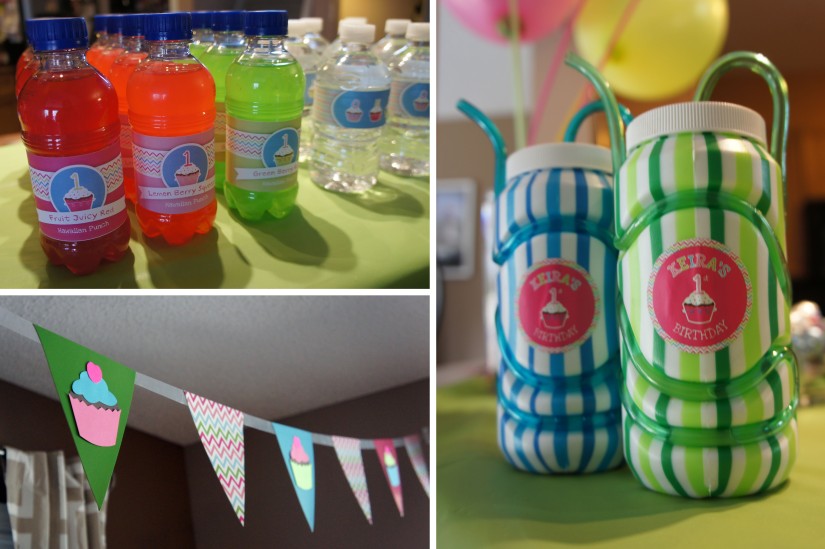 The fireplace was decorated with a banner of giant cupcakes I crafted from coffee liners, and small paper lanterns I glued a crepe paper icing swirl to.  Her name was cut out of poster paper in my color scheme and strung along the same line as the cupcakes.  Above the fireplace was a framed image of her monthly shots and some chalkboard art. 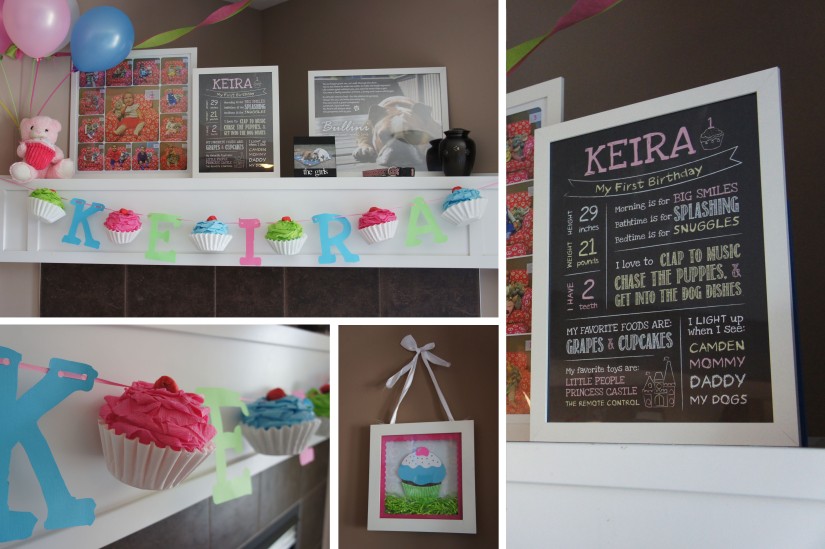 I also found cheap photo mobiles at the dollar store so I decided to use those to display photo’s of all her “firsts” – first solids, first car ride, first Halloween, etc.  The flower bouquet was a last minute addition, but were in my party colors and too perfect not to pass up at Costco. 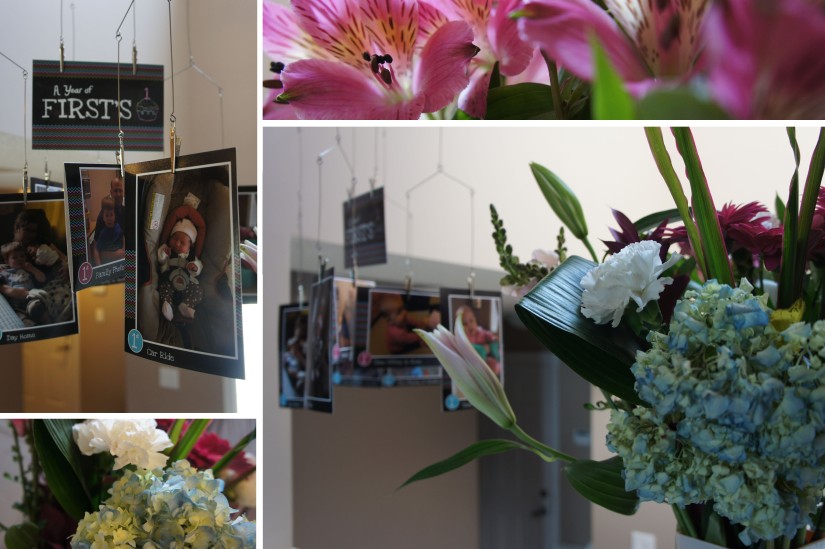 I considered the cupcakes part of the party décor and chose icing colors and cupcake liners that coordinated. 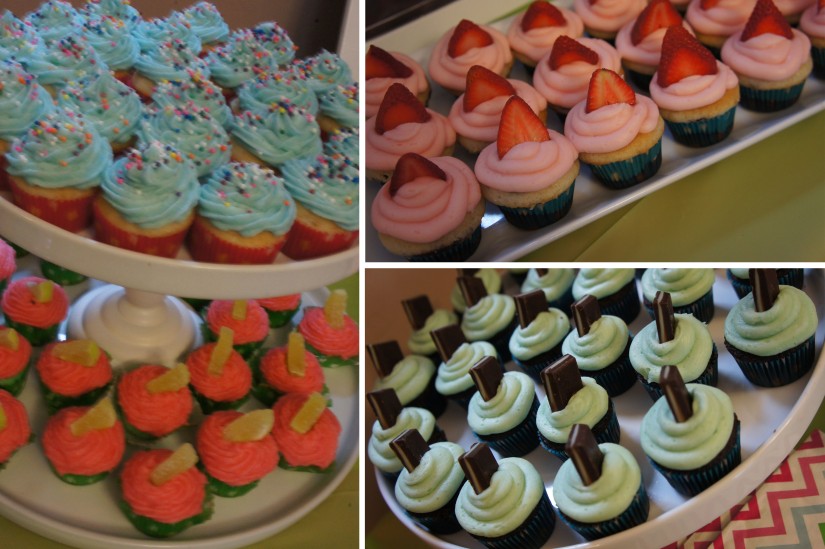 I wanted a cupcake buffet, so I made 4 different types of mini cupcakes to give a good variety.  Flavors included mint chocolate, cotton candy, neapolitan and cherry lime.  Small egg carton containers were also provided to allow guests to take mini cupcakes home with them. 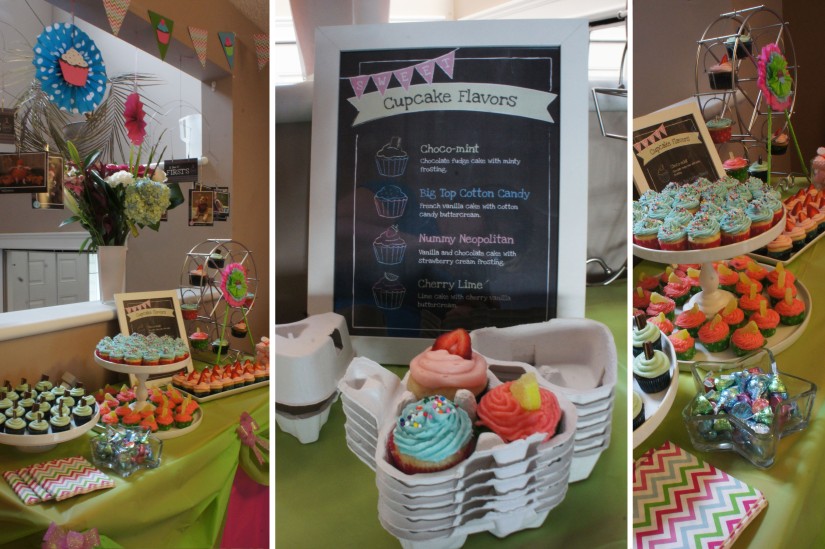 I already had a giant cupcake pan from my son’s first birthday so making a giant cupcake cake was an obvious choice.  Even though I hate working with chocolate, I decided to attempt a chocolate liner for this one and was surprised how simple it ended up being.  White buttercream was swirled on the top of the cake and I finished it off with tropical flavoured Mike’N’Ikes for the sprinkles. 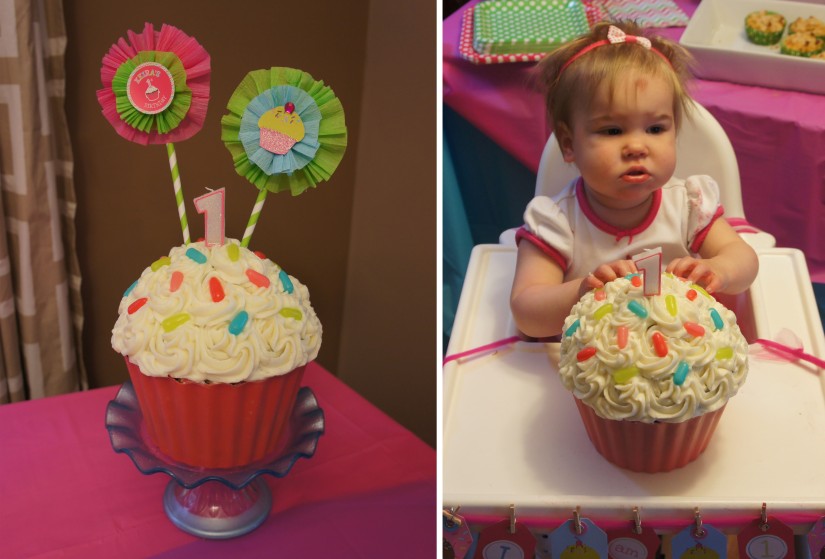 My original thought was to serve nothing but cupcake shaped food and I had a whole board of savoury cupcake ideas planned.  I finally realized that this was a little overly ambitious and went with more of a barbeque theme menu that included just a couple cupcake shaped items. 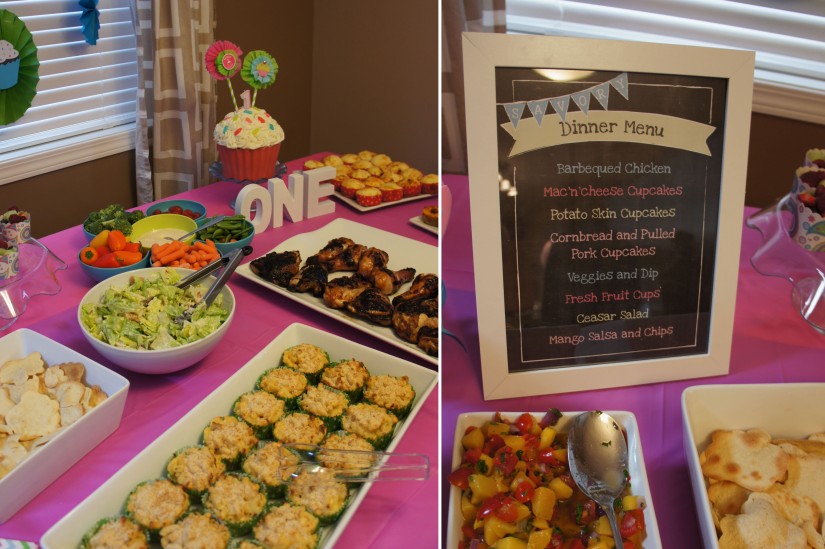 I think the favorite food item by far was the twice baked potato cupcakes with sour cream icing and bacon bit sprinkles.  We also served pulled pork filled cornbread cupcakes and I made the tortilla chips for the mango salsa cupcake shaped. 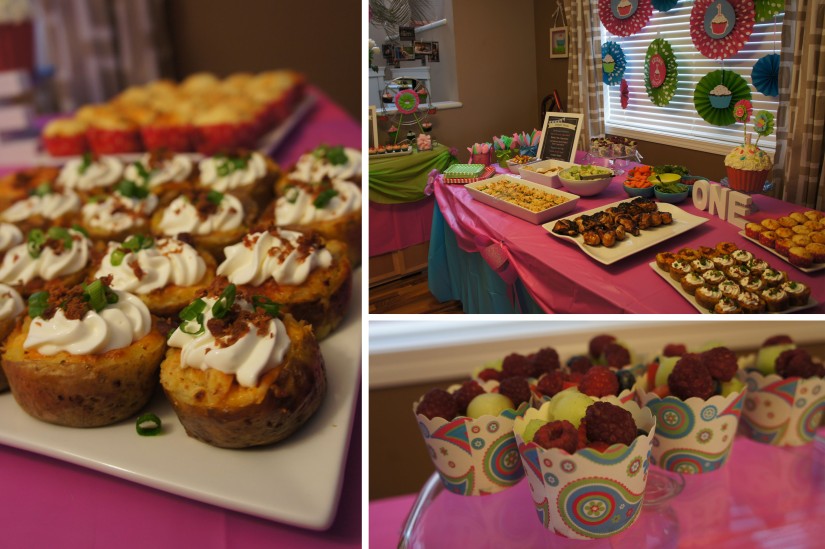 I wanted to give something useful as a favor so I came up with the idea of doing bleach pen shirts with each of the kids initials.  They didn’t turn out quite as I expected, but they were still cute.  To finish them off, I wrapped them around a cherry sucker and put them in a bowl to look like cupcakes.  I also had some leftover stickers from the drink cups so those went on bottles of bubbles for the kids to play with at the party. 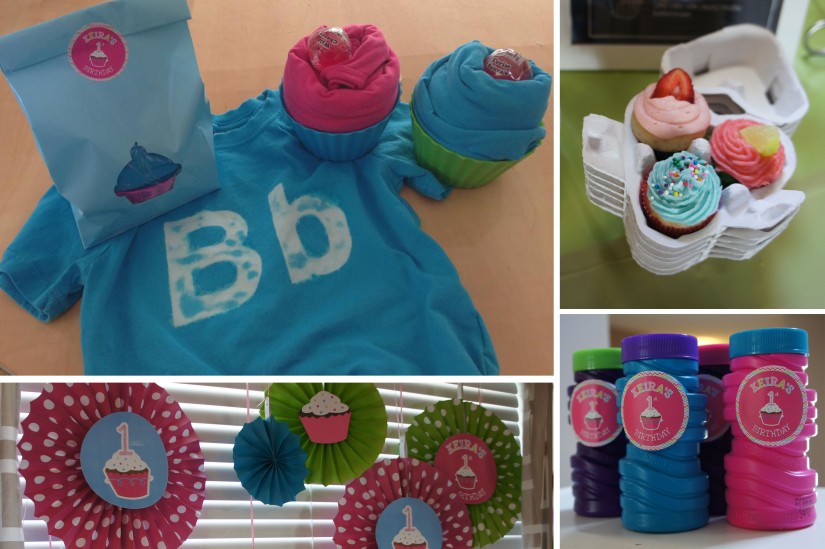 It was so much fun planning this party and I am thrilled with the way my first girly party turned out.  There are tons of cupcake theme ideas out there and it was hard narrowing my ideas down – especially when it came to choosing the cupcake flavors!  To see some of my inspiration and other great cupcake ideas and recipes, please visit my pinterest board here.

1 thought on “Cupcakes by the Dozen: Keira’s First Birthday”