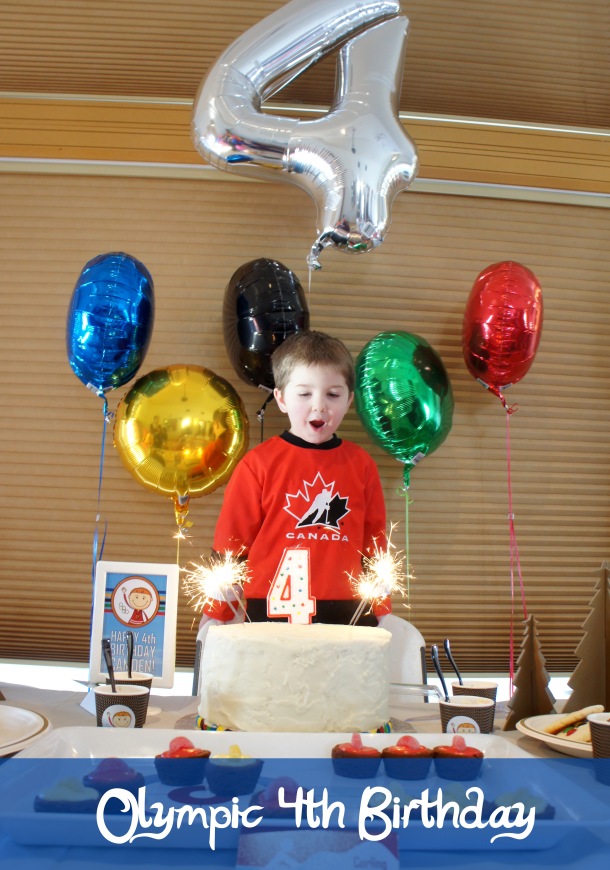 Even though he wasn’t due until March, Camden came as a bit of an early surprise in February of 2010, right during the Vancouver winter Olympics.  My water broke but things were slow to progress so we spent time during contractions in the hospital’s family lounge watching Olympic figure skating and skiing.  Right after he was born, I was lucky to get one of the hospital’s luxury theme rooms which meant a TV to watch Team Canada play hockey while snuggling our brand new baby boy.

Because of this association with the Olympics and my fond memories of that time, I made the decision right after Camden’s third birthday that his 4th birthday should be Winter Olympic themed.  His actual birthday ended up falling on the same Sunday of the Sochi Olympics closing ceremonies so we had a Sunday morning brunch to celebrate.

I started off by designing the invite.  I kept it simple with a flat card that included a graphic image of my birthday boy: 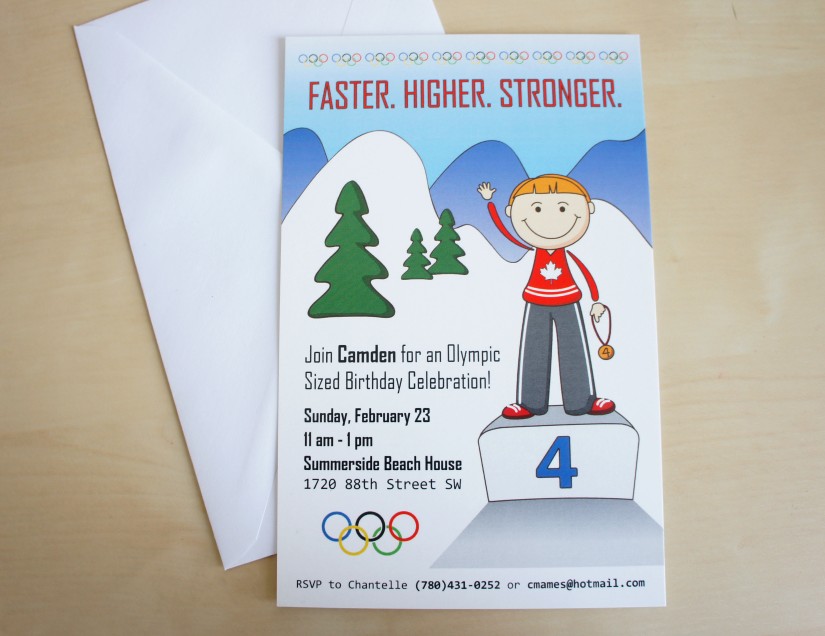 This was the first kids birthday I hosted outside the house and it ended up working out pretty well.  We rented out a large hall just blocks from our new home and I brought in the decorations, food and activities to keep the kids busy.

This was my first time having actual seating for everyone so I took the opportunity to make nice place settings at each table.  I found some flag runners and matching plates I layered with gold star shaped dinner plates, Canada flag shaped napkins and small medals I made from ribbons glued to chocolate coins.  At the center of each table and on the food tables were gold colored cardboard trees I found on clearance at Target after Christmas – it always pays to know your party theme well ahead of time and be on the watch for clearance items that might fit the décor.

Above the cozy fireplace, I hung both the large Olympic Rings Display I crafted out of plumbing insulation tubes and streamers, and the Olympic party banner I designed.

For food, I had both a brunch foods table and a sweets table.  For the brunch items we had bowls of fruit in the Olympic ring colors, fruit and yogurt parfaits, sugared bacon smokies, raspberry cream cheese french toast roll-ups, mini quiche, 2 bite cinnamon buns and 3 types of muffins (chocolate banana swirl, Orange Pineapple, and Almond Raspberry).

To display my mini cinnamon buns and muffins I constructed large mountain shaped stands out of dollar store foamcore.  They were a little time consuming to build, but I think the final result was worth it and I will definitely be using the idea again for future parties. 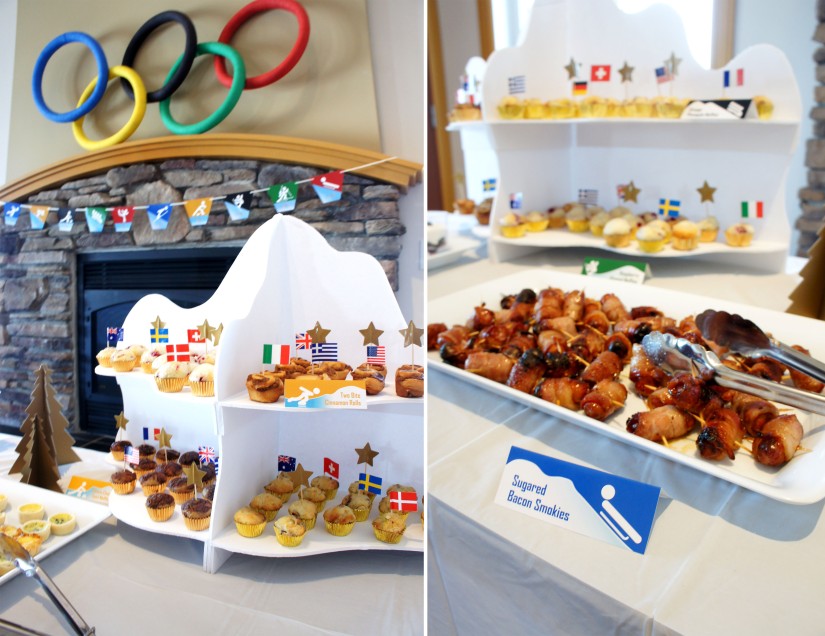 For the sweets table I had sugar cookies I decorated with M&M’s to represent the Olympic rings, small cups of hot chocolate mousse and edible curling rocks I fashioned out of two bite brownies, some colored melting chocolate and candy rings. 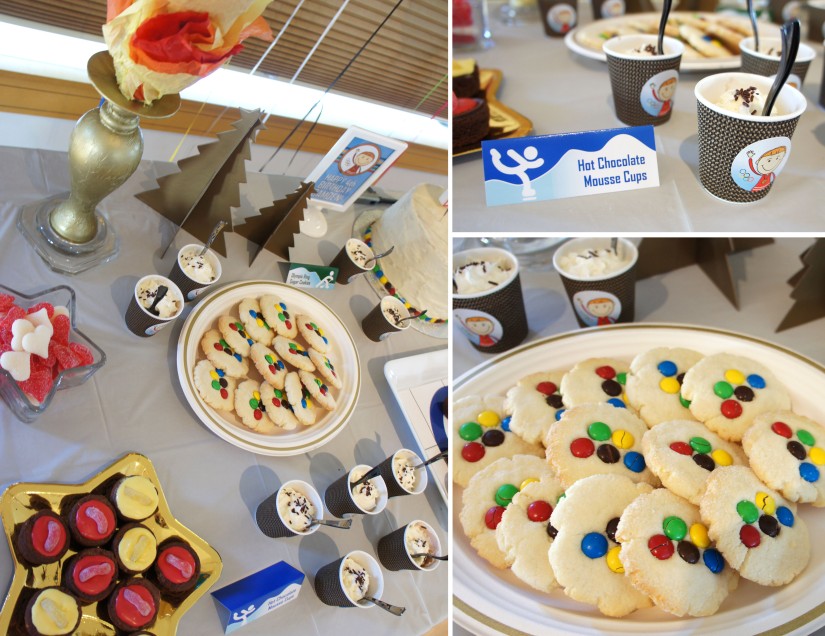 And, of course, there was also birthday cake.  I kept the outside plain and simple, with the surprise being the 5 layers inside colored to match the Olympic rings.  Camden loved his “rainbow cake” and I think it is one of the tastiest cakes I have made to date. 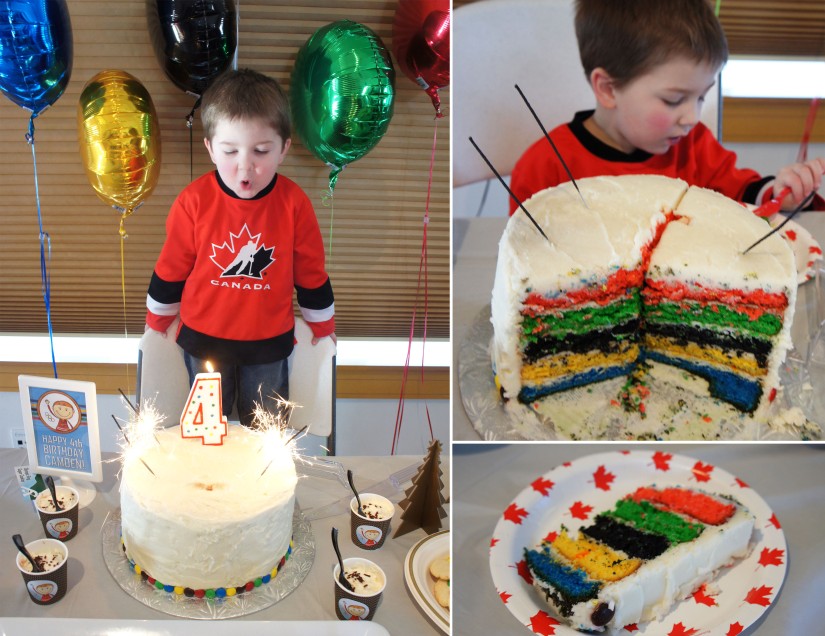 At the “Decorate Your Own Medal” table, the kids had a fun time stringing colored pasta and a juice can lid on ribbon to craft their own Olympic medal.

To keep the kids entertained, we also brought in our bouncy castle and set up a set of mini hockey nets with sticks and balls for them to play.  The bouncy castle, by far, was the most popular activity at the party! 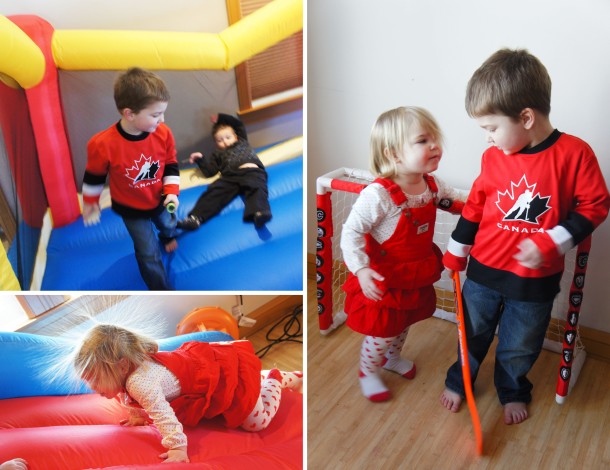 One activity that wasn’t such a huge hit was the Pin the Rocks on the rings game.  The kids all took a turn, but it didn’t turn out to be as exciting for them as I thought it might be. 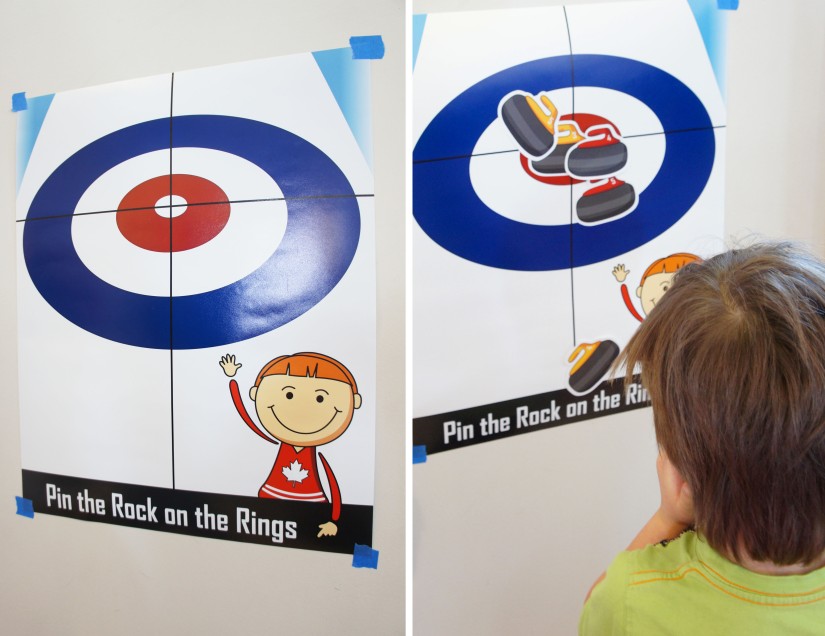 For favors, I ended up getting a good deal on mini hockey sticks and balls at the end of summer and  bought enough for each kid to play with at the party and then each take one home.  I continued with the hockey theme in the treat bags and included a small Zamboni toy I found at McDonalds, a foam hockey ball and a small bag of hockey played shaped candies I finished off with a personalized topper. 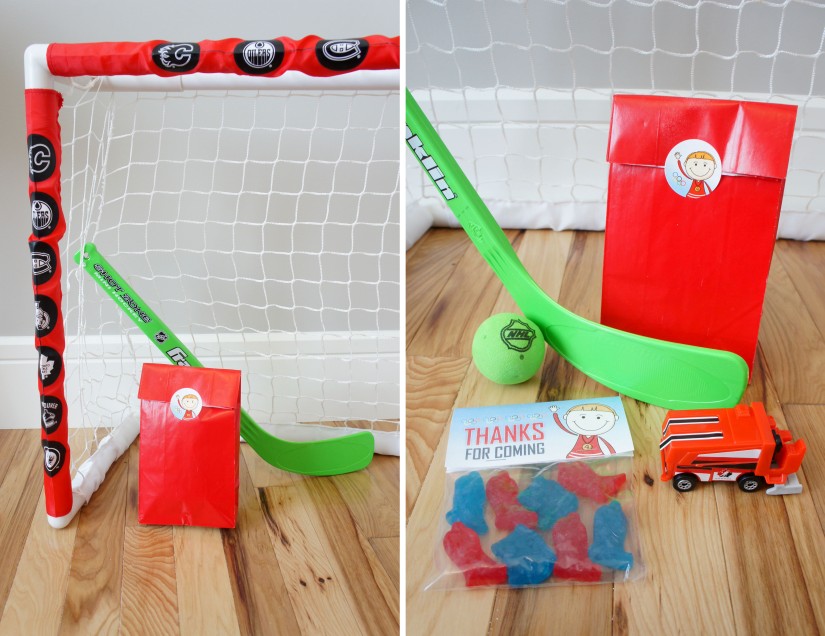 It ended up being a crazy hectic weekend for us between getting possession of our new house on Friday and then hosting the party on Sunday, but it all worked out and I was happy to have the chance to celebrate my little boy with family and friends.  I was told the kids all went home exhausted and one of the 3 year olds was even so kind as to tell me it was “the best party ever!” 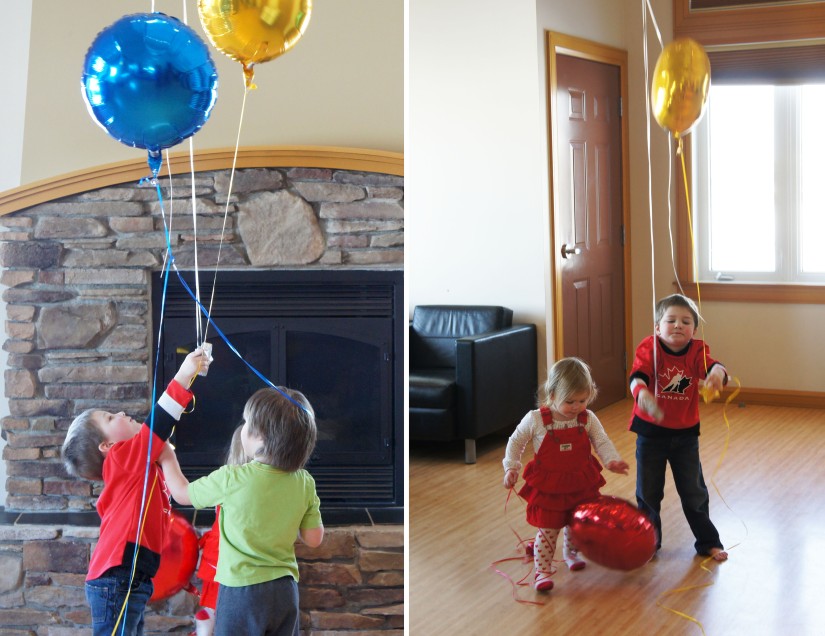 I can’t wait to start planning for next year!