I thought my daughter’s Frozen obsession would have subsided by now, but she will be joining the hoards of other little Elsa’s this Halloween.  Also joining in will be our large hound dog, thanks to this Elsa dog dress we came across at Petsmart.

My daughter wanted the dog to be a princess last year and I was able to talk her into something else because they didn’t have our dog’s size.  Our 70lb Basset Hound/Bulldog just doesn’t seem like the princess type to me,  but when my daughter excitedly pointed out the Elsa dog dress large enough to fit Nova, I knew I was going to have to give in.  Thankfully the dress was on sale and I bought it thinking my daughter could dress as Anna to accompany our four legged Elsa.

Well, my daughter had other plans.  Every time we passed a rack of Halloween costumes, she beelined straight to the sparkly ice blue Elsa costumes and then would look towards the adult sized costumes and plead “Pwease, I be ti-ta (Elsa) and you be Anna, momma!”  I don’t exactly have the figure to pull off a princess dress, but my 3 year old doesn’t see that;  in her eyes mommy is a princess. I normally don’t dress up for Halloween, butit is hard to argue argue with a sweet little voice and puppy dog eyes asking repeatedly to be the Anna to her Elsa. 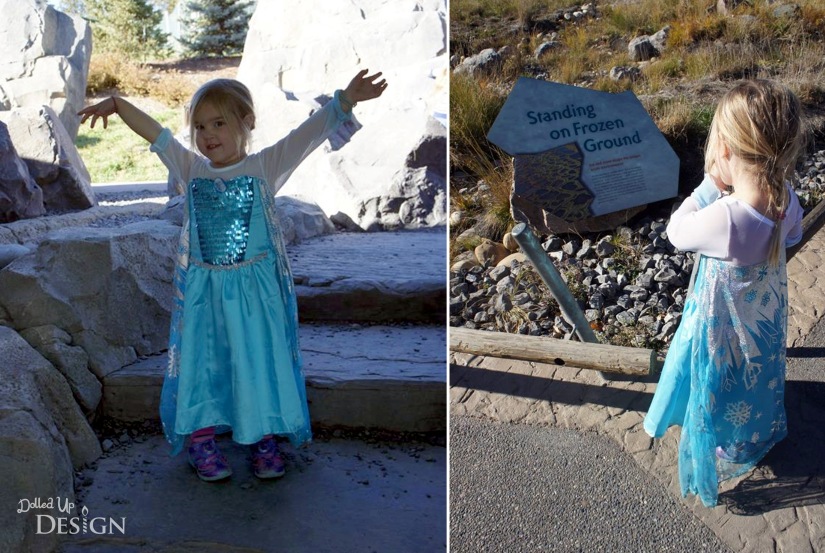 After looking at many Elsa costumes in store, I decided to order an Elsa dress for Keira from aliexpress.com.  I was hoping it wouldn’t have the typical scratchy sleeves and I am very happy with the dress from the price.  For my costume, I also wasn’t impressed with the selection in the Halloween aisles and decided I would be much more comfortable in something I assembled myself.

I started with a light blue long sleeved shirt and a black tank top to layer over it.  I embellished the tank top with fabric paint, much the same as I did on my daughter’s DIY Anna stocking this past Christmas. I simply sketched out the design with white chalk and then went over it in gold, pink, green and blue fabric paint.

I decided to go with a basic navy skirt from Old Navy for the bottom portion of my dress and for the cape I used a large pink fashion scarf I found at Dollarama.  I contemplated adding more fabric paint detail to the skirt, but decided against it so I could get more use of it after Halloween. 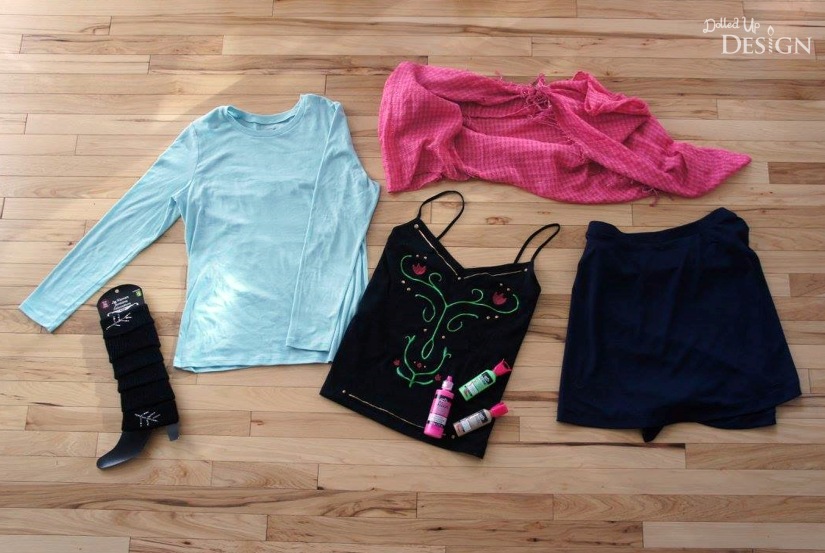 I still don’t think the dog or I really have the figures to pull off being Disney princesses, but my daughter is beyond ecstatic and that is all that really matters!  Seeing my daughter’s face light up when I showed her my finished costume was all I needed to know this costume was totally worth the time, effort and the little bit of embarrassment.

2 thoughts on “A DIY Princess Anna Costume for Mommy”