It should come as no surprise that one of the kids and I’s favorite stores is the Disney Store.  Although there are two here in Edmonton, we don’t seem to get to the malls that often and that means the kids are always excited to spend a good chunk of time checking out the new merchandise and playing in store.

Several months ago I hit up the mall while the kids were in school, and just happened to walk by first thing as the Disney Store was doing a special store opening ceremony.  I learned this is something they do daily and have been meaning to take the kids, so last week my daughter and I finally went to see what it was all about.  She was still too young for the Lego Monthly Mini Build I had her brother signed up for that evening, so I figured this was something special her and I could do that day.

When I told my daughter what we were doing, she insisted on wearing her Sleeping Beauty princess dress.  I tried to convince her that something a little less fancy would work, but decided it was not worth arguing.  She is still little enough she can get away dressing like a princess for an every-day trip to the mall, and I need to cherish these carefree moments of childhood while I can.

We arrived early at the mall and grabbed a coffee and breakfast to eat while we waited outside the store.  I went on a regular ol’ Wednesday figuring it wouldn’t be busy, but wanted to be there a good 20 minutes early to ensure we were first in line.  Since the store does do it daily, I also prepared my daughter for the possibility that if she didn’t get to do it that day we could always come back for another chance.

The mall was quiet and my daughter anxiously kept peeking in the windows of the Disney Store as we waited.  The giant lock was at the front glass folding doors and promptly at 10 am, a cast member came to fold back the glass storefront and choose the first person in line to help her with the ceremony.  Lucky for us, it was my daughter! 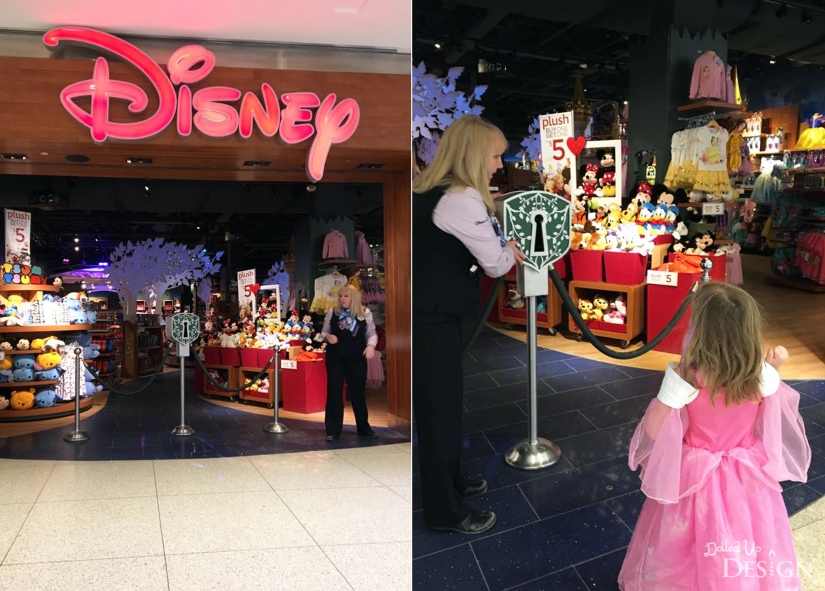 Just as with anything Disney seems to do, the Disney Store opening is a whole experience.  The cast member pointed out an image of the sun coming up projected on the wall of the store, and fairy dust twinkled on the trees as we waited for the oversized key to be brought out by a second cast member.  Once my daughter helped fit the comically large key into the matching lock, we counted down from 5 and my daughter got to help twist the gigantic key to release the ropes and “unlock” the magic and imagination in store.

After the rope drop, my daughter was even presented a special keepsake version of the key to bring home.

And, of course, there was plenty more fun and magic once we were in the store.  Both my kids love standing in front of the magic mirror and waiting for the video images of Cinderella’s fairy godmother or Merlin to appear.  My daughter always enjoys the coloring station and watching the movie clips and music videos that play in the background.

This was such a fun experience and a great way to infuse a bit of Disney magic into our day.  My daughter and I shared a lovely morning window shopping at West Edmonton Mall and she was incredibly proud to show her brother and dad her keepsake key when they got home later that afternoon.

To see if your Disney Store participates in the Daily Opening Ceremony, look up your nearest location and check the Events section on disneystore.com.