My daughter turned 6 at the end of May and we celebrated at home with an Equestria Girls themed dance party.  Keira had a My Little Pony themed party for her 4th birthday, so I will admit I was a bit disappointed when she asked me to plan another Pony themed party.  Luckily I am not good at getting rid of things so I still had all the decorations from that party and was able to re-vamp a lot of the same ideas to make things feel new and exciting. 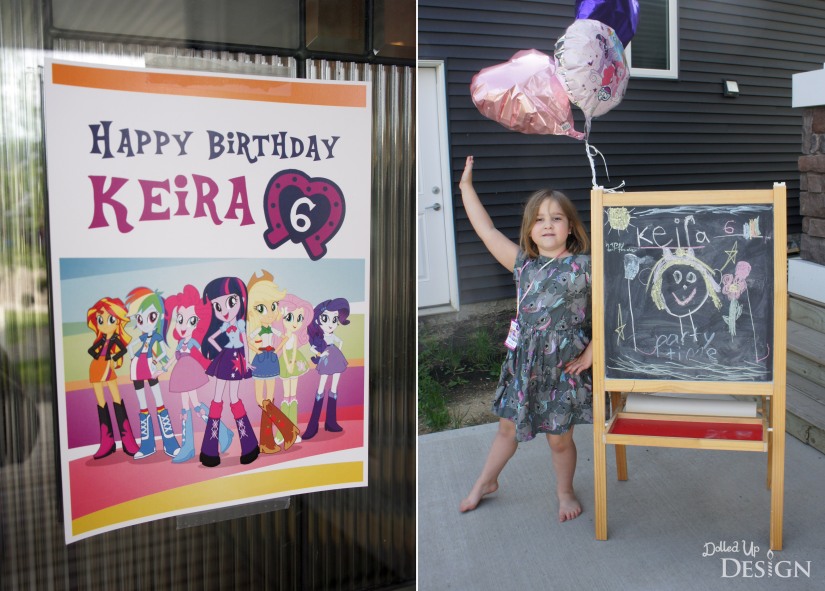 Keira loves singing and dancing, and a big part of why she loves the Equestria Girls is the music.  I have downloaded a couple of the soundtracks and even find myself singing along to the catchy tunes when I am alone in the car.  It only seemed natural to give the party theme and decorations a music themed spin. 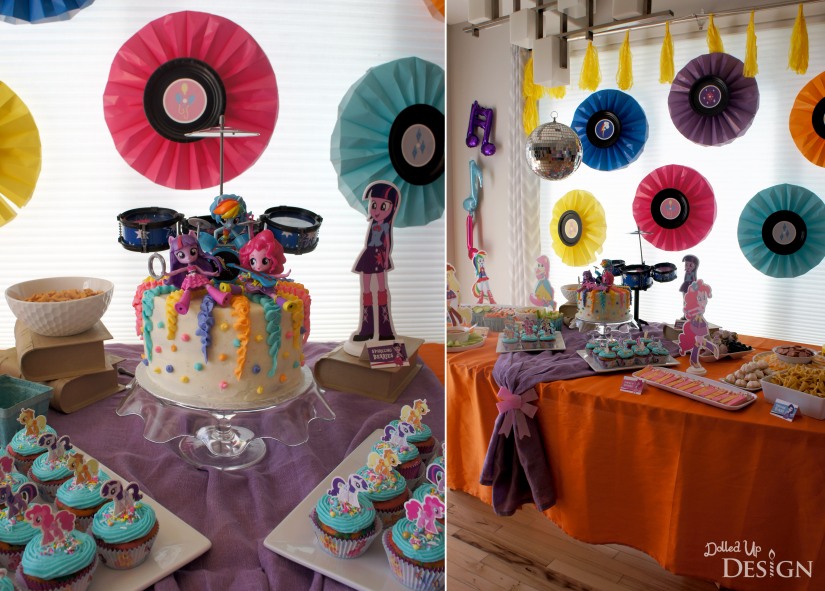 For the dance party part of the party, we created a dance floor in the basement.  I put up decorations and ordered some revolving colored lightbulbs to add a disco ball effect to the room.  My son also decided he was going to DJ the party and came up with the idea to make himself a DJ booth complete with speakers he and I crafted from cardboard boxes.  I love when the kids are excited for the party and help come up with their own ideas!

My daughter also insisted her BFF’s be get to be VIP’s at her party.  I loved the idea, but didn’t want to exclude anyone so we decided to create personalized Very Important Pony passes for all the guests.  These were easy to design and print-out, then tie a ribbon to for the kids to wear around their necks.  My kids also set up a VIP lounge in the small space under the basement stairs, where they had cushy child sized chairs and an iPad playing one of the Equestria Girls movies 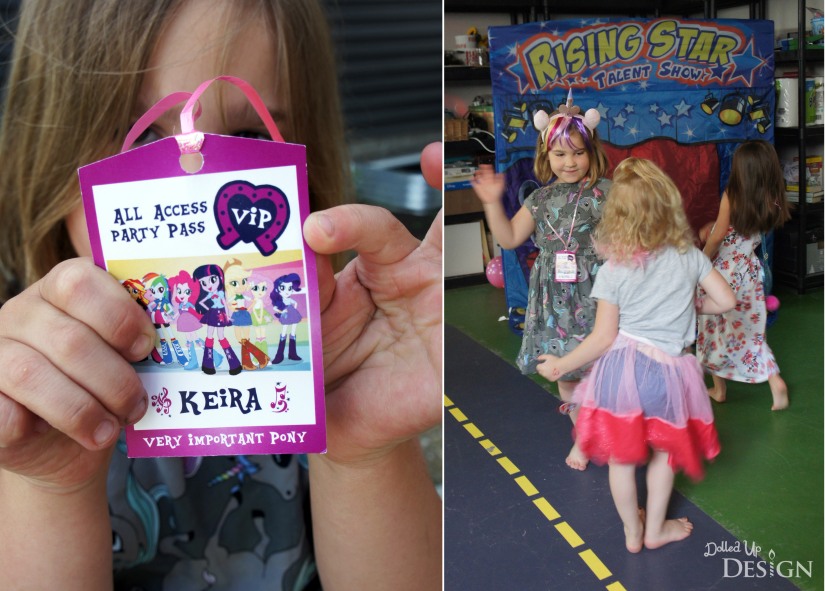 One other activity we had set-up downstairs was DIY beaded friendship bracelets for the guests.  This was a huge hit at her first MLP party, but there was so much singing and dancing going on that it didn’t end up being nearly as popular this time around. 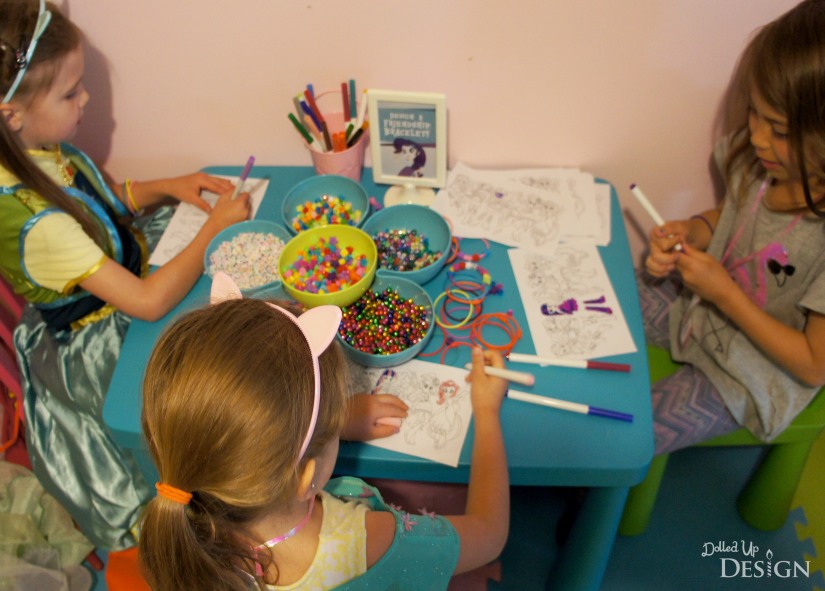 Upstairs in my dining area, I had my usual party table set with all the food and decorations.  I went with a slightly different rainbow color scheme, but used the same method from the last MLP party to create fan decorations from paper bags.  These were hung as a backdrop and accented with black paper plates I added cutie mark record labels to.

I also copied my idea from last party to mount character wall decals to inexpensive foam core and then cut them out to make stand-up figures on the food table.  To create the stands, I hot glued the girls to inexpensive terra cotta pot bases I painted white.

For the menu, I came up with simple and kid-friendly snack foods themed to each of the Equestria girls.  One of the biggest hits was Pinkie Pie’s Confetti Cookies I made from storebought wafer cookies dipped in melted white chocolate and scattered with a colorful sprinkle mixture.

My daughter LOVES berries, so for Twilight Sparkle, I used the same melted chocolate from the wafer cookies to create chocolate covered strawberry Sparkling Berries.  Sunset Shimmer was represented with sliced cheese and sausage in a arranged in a sunshine pattern and labelled Sunshine Snacks.

When it came to Applejack, I knew I wanted to make my favorite Apple Caramel Dip and serve with sliced granny smith apples.  I am not sure the kids ate much of this, but I sure enjoyed it.  I also copied my idea from my original MLP party to used Bugles for Rarity’s snack and they will now forever be referred to as Unicorn Horns in our house.

I was going to make the same layered Jello I made for the My Little Pony Party, but was happy to come across the recipe for Stained Glass Jello.  It has all the colors and the same creamy white layer, but was a lot less time consuming then building and waiting for it to set layer by layer.

And it wouldn’t be a birthday without cake!  The birthday girl insisted she needed both cupcakes AND a cake, so who was I to argue? 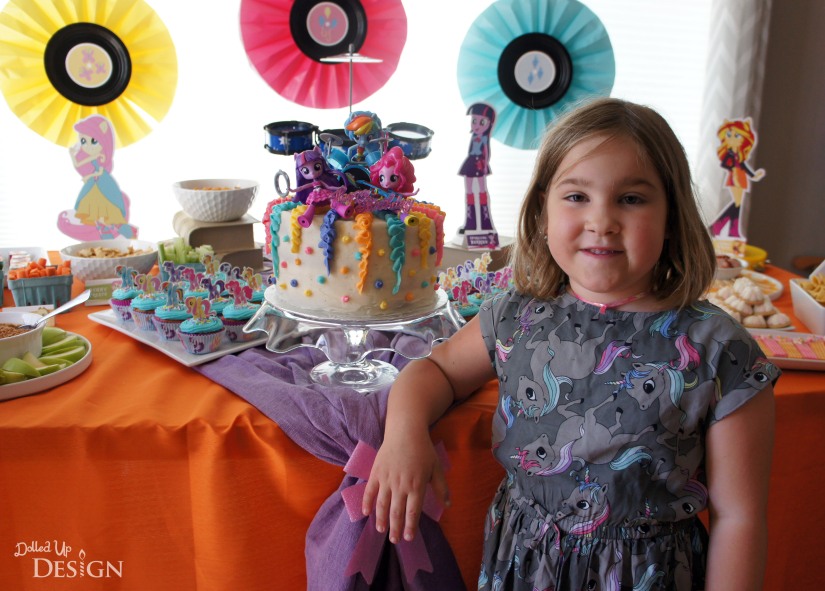 The cupcake toppers were ordered for her original My Little Party, but arrived late and ended up getting stashed in my closet for the past 2 years.  I was happy to have held onto them when she asked for cupcakes with Pony’s on top.  For the cake part, I went for a tie dye effect, layering purple, yellow, orange, blue and red colored cake batter.  I was able to find the pony printed cupcake wrappers at Bulk Barn and used the same multicolored sprinkle mix used on the wafer cookies.

Since I already had the cake component covered with cupcakes, I was originally thinking of doing a Rice Krispie cake. Keira did not like this idea and was very specific in her request for a chocolate cake with vanilla frosting.  Multicolored buttercream streamers and polka dots were piped onto the outside of the cake, and I added a few of her new Equestria Girls Minis dolls on tops to carry out the theme. 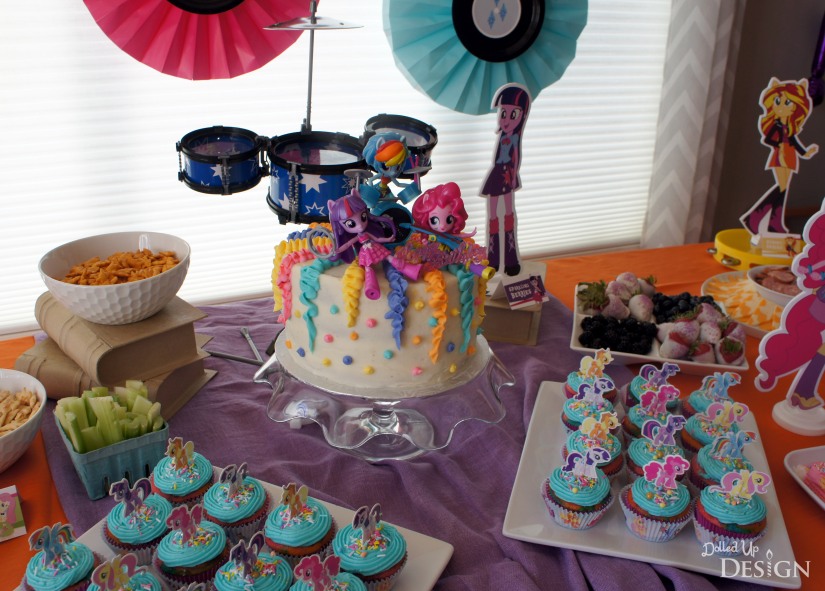 For drinks, I mixed up a simple Sparkling Apple Cider and some Pinkie Lemonade and served them out of juice dispensers. 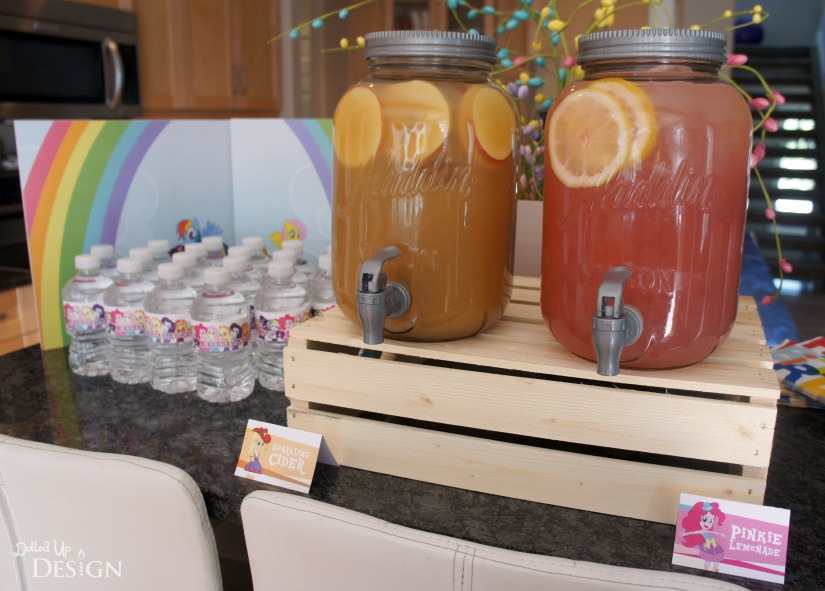 And, no party of mine seems to be complete without customized mini waterbotttles, so I created and printed out some cute labels that had Equestria girls and said “Happy 6 Birthday Keira” on them. 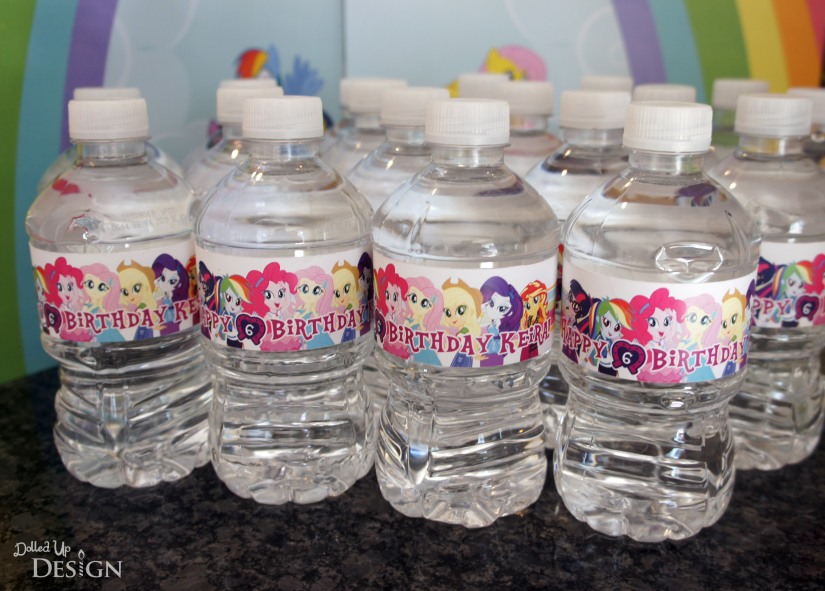 I still had our Pinkie Pie piñata almost fully intact from the first party so that was another easy request from the birthday girl to say yes to.  We used the pull strings to get it open the first time around, so it was easy to re-fill with candy and hot glue the bottom flap closed.  Being a couple years older, I also knew the kids would be thrilled to smash the piñata with a bat rather then just pull strings.  There was definitely no re-using poor, beheaded Pinkie Pie after this second time around!

Along with the assortment of candy from the piñata, I had pony ear headbands, ring pops and bubble filled microphones to send home with all the guests.  The headband stand was another re-use from our first party and I ordered the ear headbands on aliexpress. 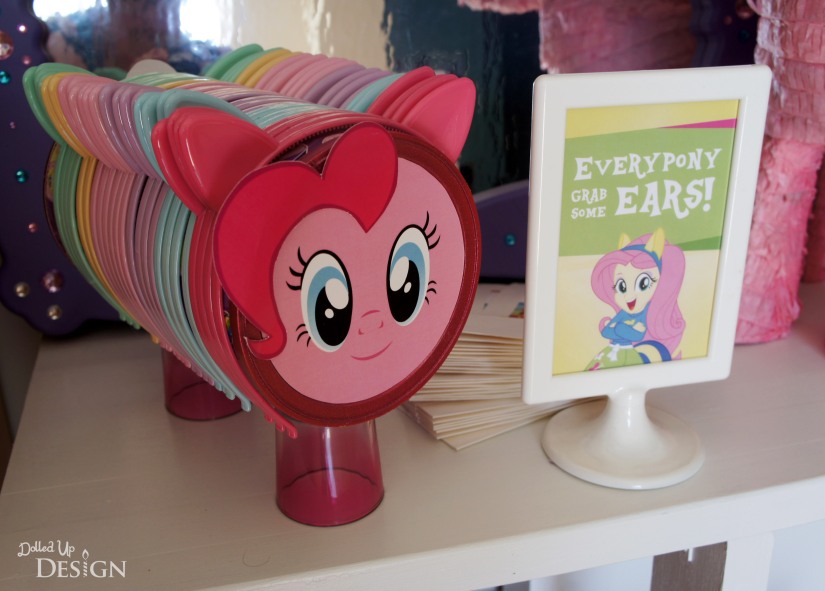 The bubble microphones were a Dollar Tree find that I re-wrapped with customized Thank You labels I designed.  They fit the music theme nicely and bubbles are something kids always seem happy to get and use.

Although it was not my first choice of themes, I ended up having a lot of fun planning this party.  I loved my kids involvement planning and creating some of the elements, and enjoyed watching my daughter’s excitement grow as it all came together.  She had a blast with all her new school friends and it was a lovely day celebrating our sweet girl.