Last July we got a new (to us) trailer and made many wonderful memories camping in the last half of the summer and into the fall.  As the snow has begun to melt, we are all longing for the warmer weather and the chance to get the trailer back out of storage so we can go on some new adventures.  END_OF_DOCUMENT_TOKEN_TO_BE_REPLACED 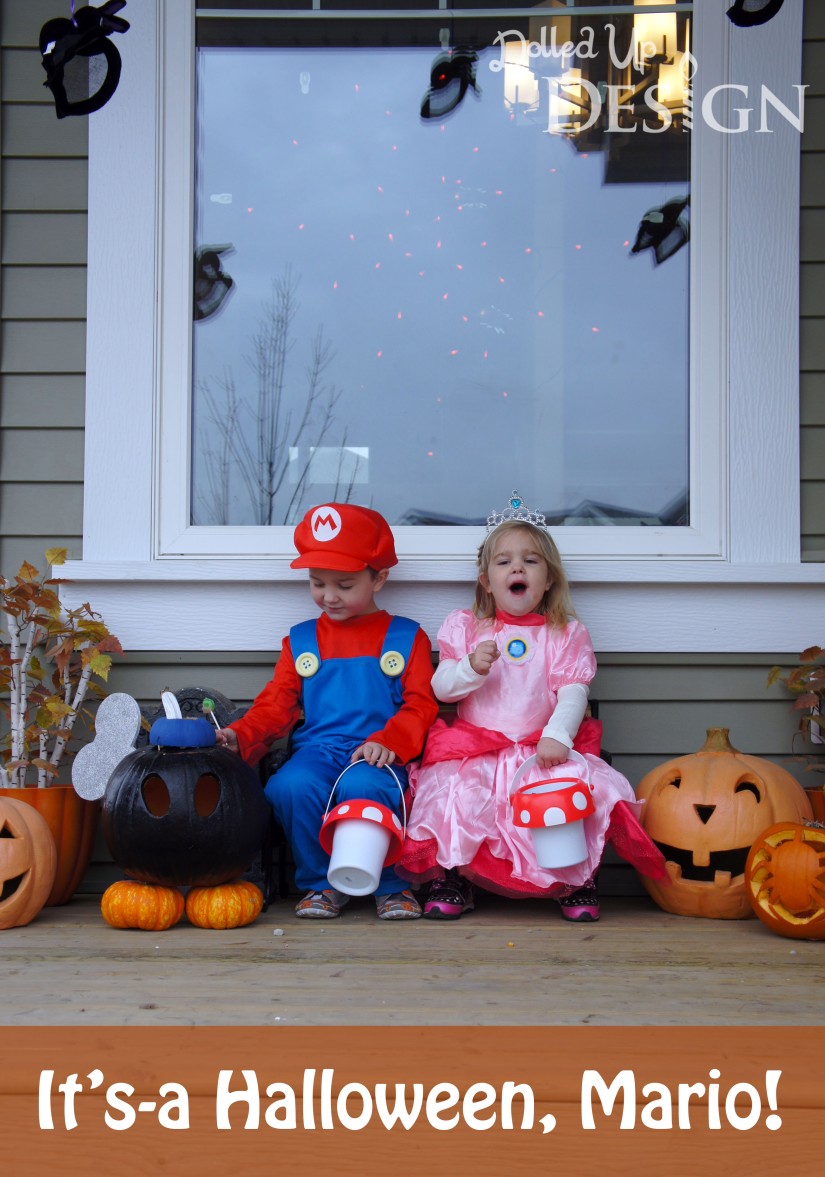 I hope everyone had a Happy Halloween!

As you can guess from the title and pictures, our Halloween had a bit of a Super Mario twist.  My 4 year old has been really into Mario lately and spends his iPad time watching all kinds of silly youtube video game reviews.  When he decided in early September that he wanted to go as Mario for Halloween, I was a bit worried it might be a phase and he might change his mind.  Lucky for me, the Mario love is still going strong and my little guy was more then happy to dress up as his favorite video game character.

For my little girl, I had picked up an adorable owl costume on clearance from Old Navy last year, but she was none too fond of it and big brother insisted she should be Princess Peach.  There is only so long he is going to want to coordinate with his little sister, so I had a hard time saying no to the request.  I do love themed costumes and it ended up working well with the princess obsession Keira has developed over the past month. 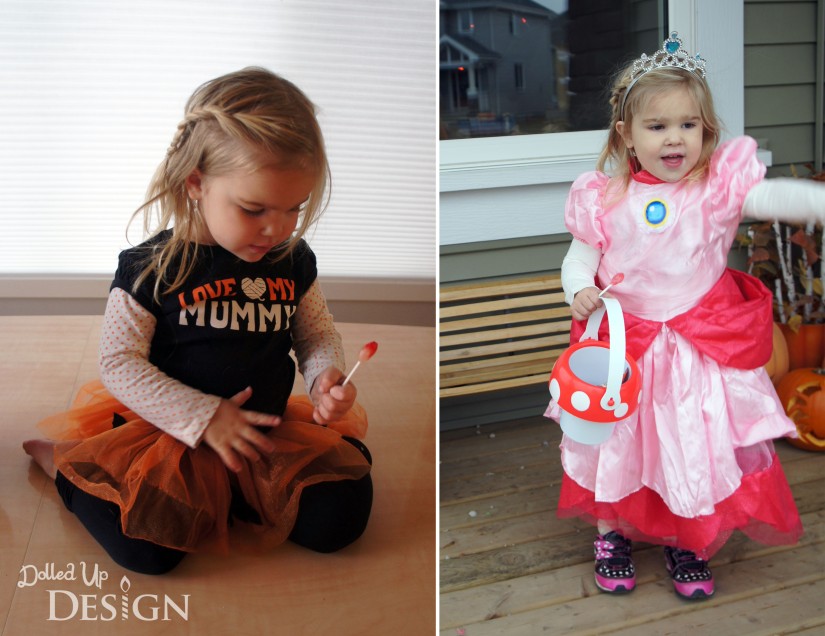 I wasn’t going to buy the dogs new costumes, but them ended up being 75% off when we went to the petstore so I let Camden pick one out for each of them.  He chose a bat for Rumbull and a bumble bee for Nova since there are bats and bees in some of the Mario lands.   The dogs and kids were not as coordinated as I have done in the past, but it worked! 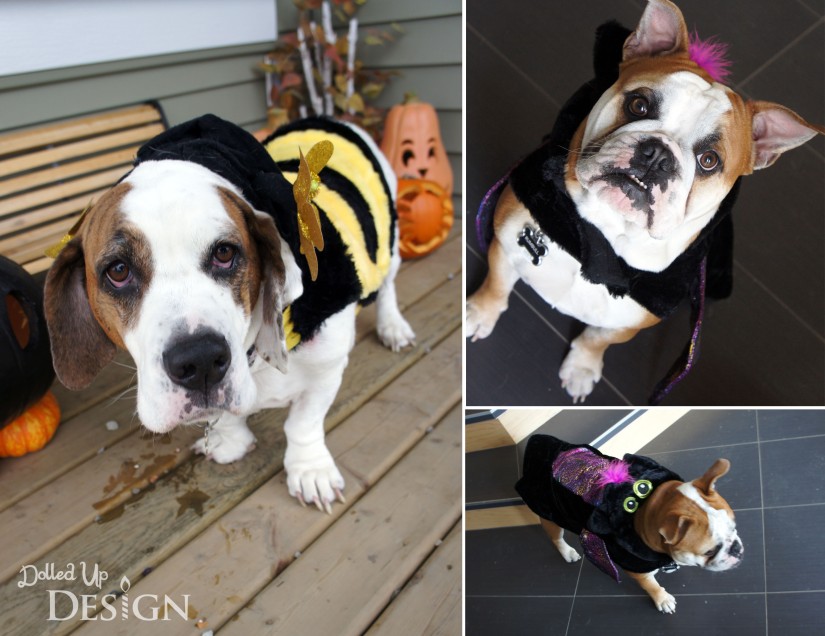 I wanted to do some special treats for my Mario to hand out at his preschool Halloween party so I ended up coming up with these cute candy filled mushrooms.  They were a bit time consuming, but it was an easy craft and all the kids seemed pretty excited to receive them.  I will try to get a tutorial up for them in the next couple weeks for anyone planning a Mario party.

And, of course, we had to have a Mario themed pumpkin!  Using a big round pumpkin with a nice long stem, and 3 mini pumpkins I was able to put together this cute bomb pumpkin.

It did require a bit of time for spray painting and assembly, but this is one of the easy pumpkins I have ever carved – just two oval eyes!  After I was finished, Camden made a point to tell me I did a really good job, so that’s all the validation I needed.

On Halloween we ended up going to the mall again for a little bit.  At the mall, Keira was excited to see the animals and bounce in the bouncy castles, while Camden was very excited to have the balloon guy make him a hammer!  He has been insisting all week that his Mario costume needed a hammer but I never got around to getting him one.  This couldn’t have worked out more perfect and he proudly carried it the whole evening out trick-or-treating. 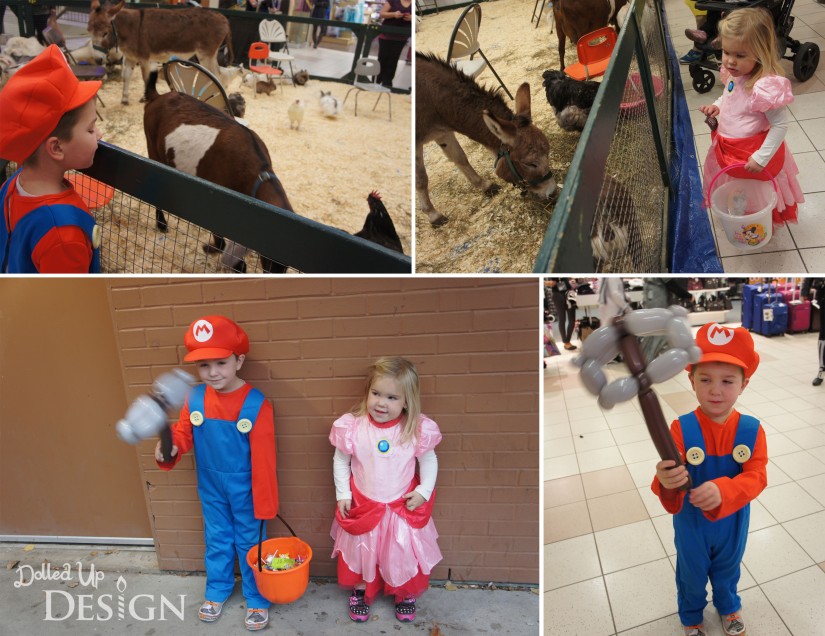 The bouncy castle at the mall even fit our Mario theme with it’s big toadstool, bouncing turtle and giant plants! 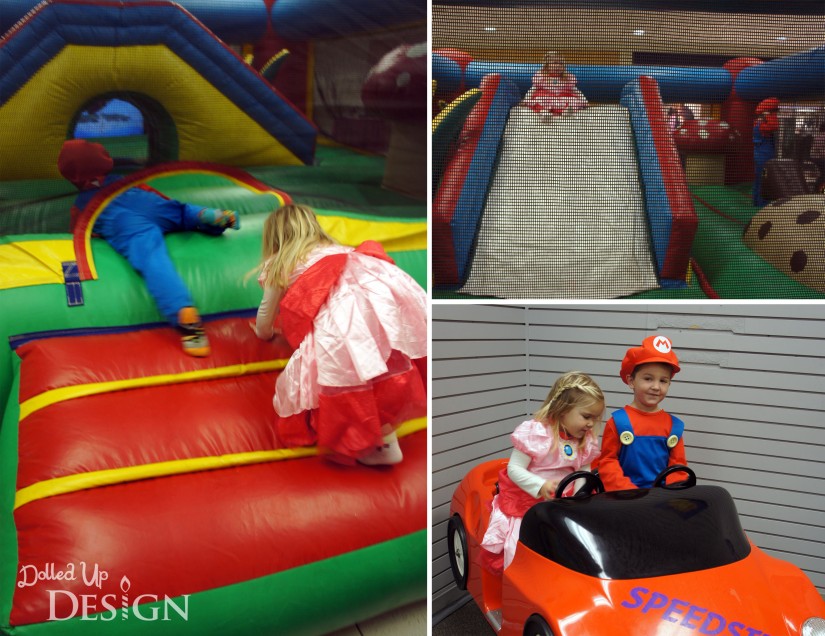 After a quick dinner, we met with some of the neighbours and went out trick-or-treating for a bit.  The weather was fairly decent for this time of year and my little Princess did really well for her first time out.  The kids all had a lot of fun and it was so nice for Camden to actual have other kids to go out with this year instead of just boring old me!

I just love seeing all the little guys in costume!

This week we celebrated a very special birthday in our house –  our loveable hound dog turned 6 on August 19!

I have always made an effort to celebrate the dog’s birthdays in our house, but this one was particularly meaningful to me because it is the first 6th birthday we have gotten to celebrate.  Our sweet Bullini sadly passed shortly before her 6th birthday. 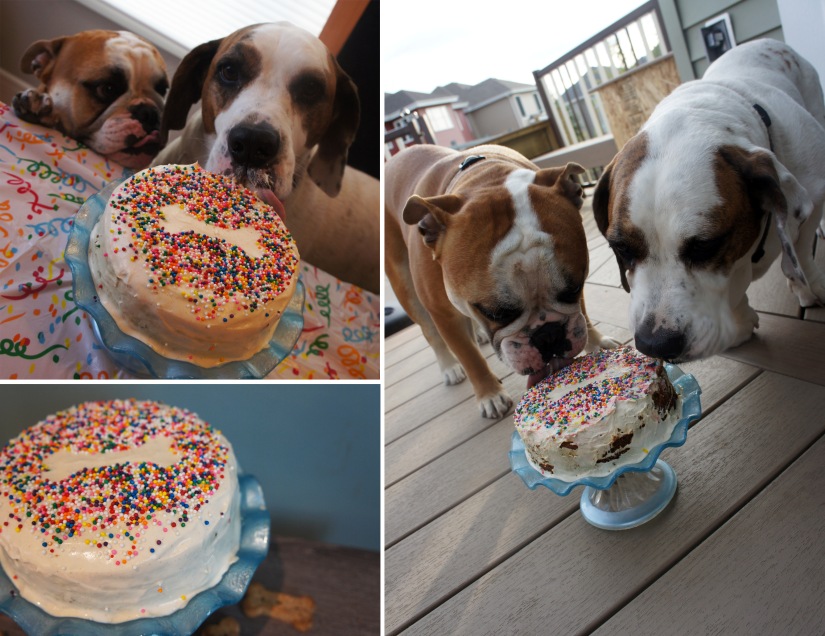 For her birthday, I baked Nova a birthday cake and the kids and I went to the pet store and picked out a couple new toys for the dogs to enjoy.

I was hesitant ordering the BarkBox, but after good reviews from my sister I decided to take a chance.  I was super impressed with the first box and can’t wait to get our next!  The dogs love the Bixbi Chicken Jerky Treats and the Healthy Dogma Coconut Flavor Barkers smell so good that I am not even disgusted by the fact that my 2 year old keeps sticking them in her mouth!  I also was worried about the quality of toy, but the Loopies Floppy Fishbone passed my tug test and looks like it will actually stand up to my heavy pullers.

We are blessed to have Nova in our lives.  She is so sweet and loving.  The kids crawl all over her and she is nothing but patient with them.  One of Keira’s first words was, of course, “dog” and she was quick to expand it to “hound dog”.  Nova is a sensitive soul and hides if there is too much noise or excitement, but never strays too far from the family.  Her favorite spot in the new house has become the back bench and it brings a smile to my face everytime I see her curled up back there as I am going about my day.

Happy Birthday Bassanova!  And thank you BarkBox for providing such a great product for the fur legged members of our family. 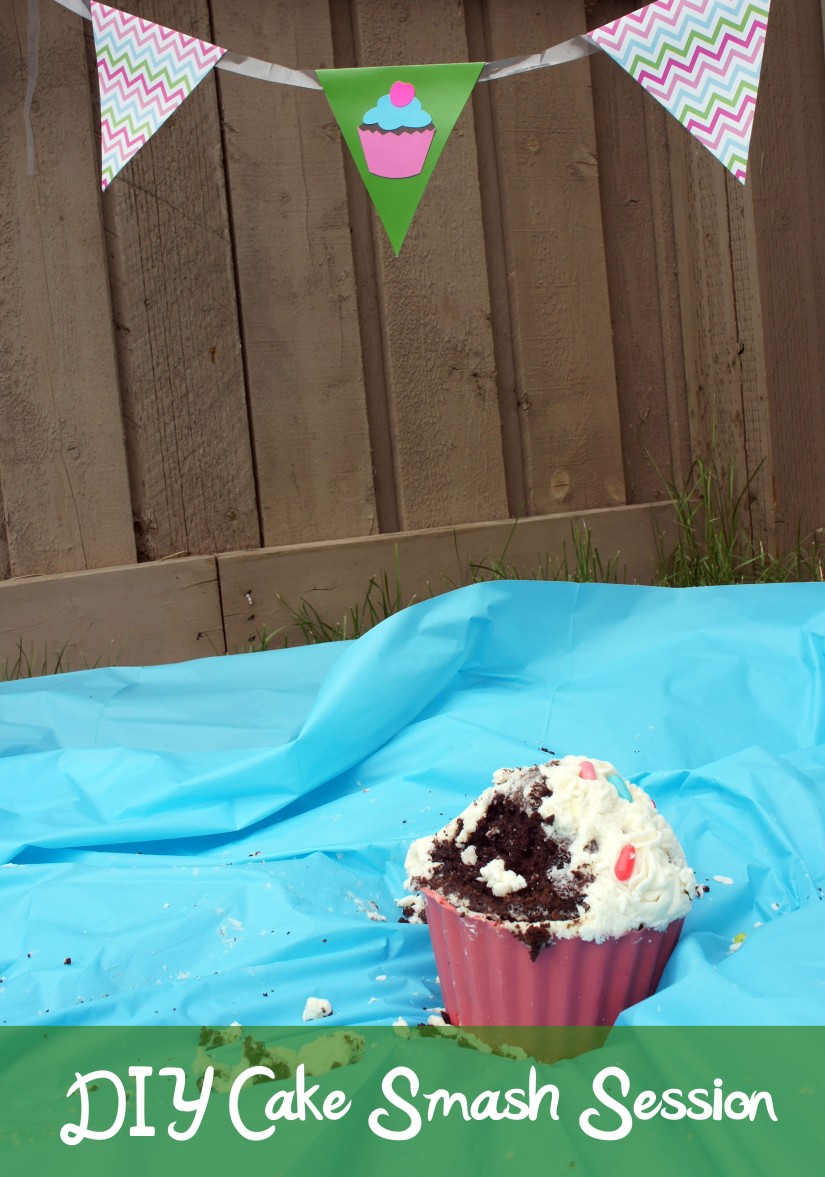 I hadn’t intended to do a cake smash session with Keira, but the day after her Cupcake Themed First Birthday Party I still had the entire giant cupcake cake untouched because the guests had enjoyed one too many of the mini cupcakes before cake time.  At first I was upset the cake would be wasted, but then realized it was the perfect opportunity to grab a leftover tablecloth, relocate the birthday banner from my dining room to the fence and go outside for an impromptu cake smash session with my little girl. 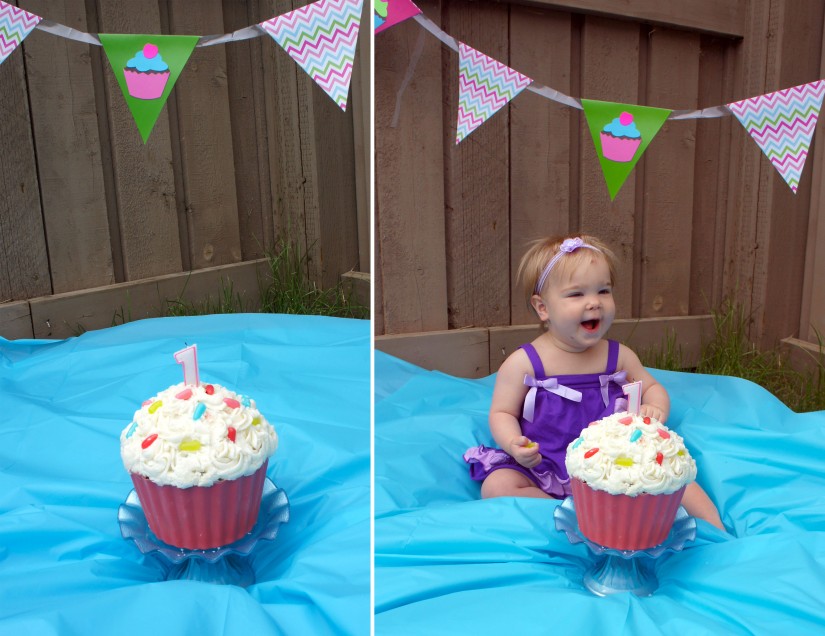 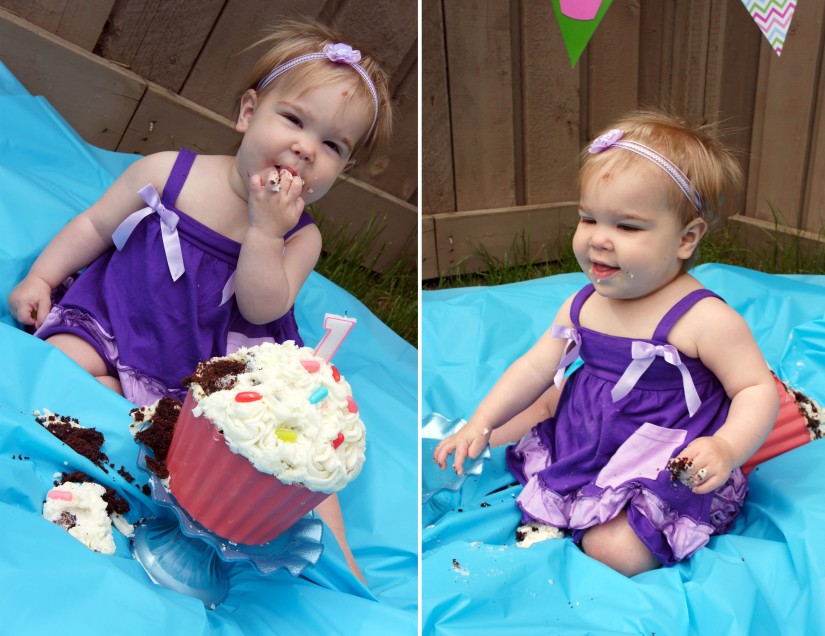 Keira was more then happy to have her new puppy join in on the action.  We got Rumbull a couple weeks before Keira’s first birthday so he is still just wee in these photos.

And then it was time to clean-up:

It has only been a year, but it is hard to believe the difference in both my babies. 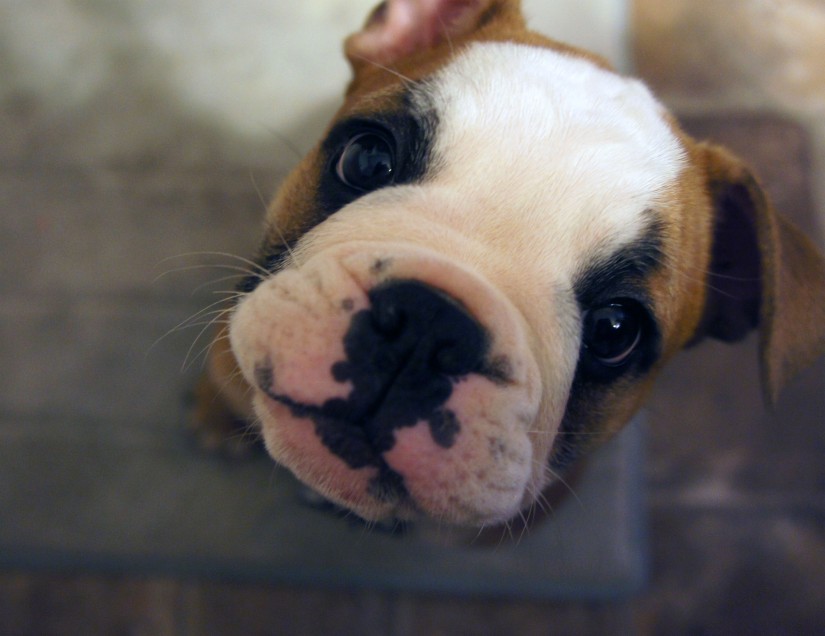 Photoshoots with the kids usually end up with both them and myself melting down, but I am always glad I took the effort when I look back on the moments I have captured.

I try to make a homemade cake for the dogs birthday’s each year, but there have been a couple times life has gotten in the way and they have ended up with store bought.  When it is homemade, my default recipe for the last 4 years has been this peanut butter delight cake.  Many of the dog cake recipes I found were meat based and I like that this one uses regular baking ingredients and is closer to a cake I would enjoy myself.  It smells great cooking and I don’t have to worry when the kids try to get in on the action!

Mix together flour and baking soda. Add remaining ingredients and mix well. Pour into a small round pan and bake for 25-30 minutes.

Mix ingredients together and use to frost cake. 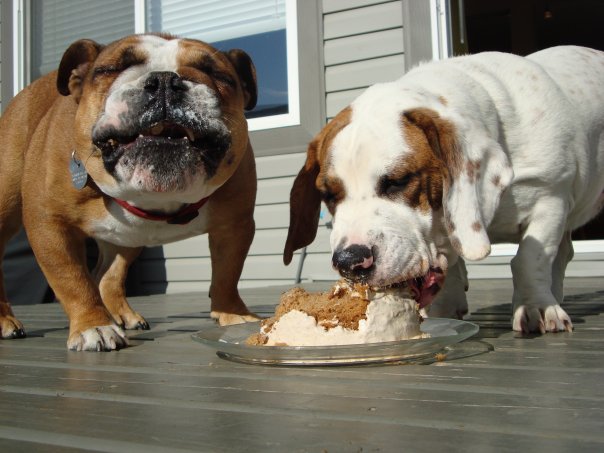 Our pups have enjoyed this recipe as both a full cake and cupcakes.  I have baked it in a loaf pan and cut it out to look like a bone and I have done it as a small round and added several cupcakes to create a paw print shape. 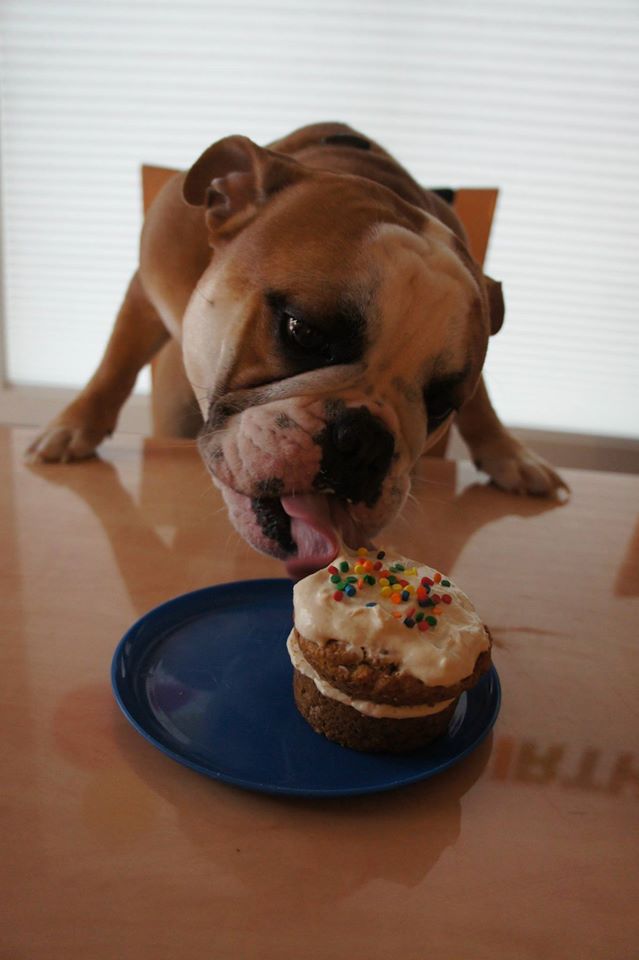 It doesn’t matter how it is decorated, my dogs love it!