If you are anything like me, you have all kinds of yummy stuff pinned on pinterest that you want to eventually try some day, but haven’t actually gotten around to making many of the recipes.  It is probably better that my pin boards continue to grow instead of my waistline, but once in a while there is a recipe I come across that I deem worthy of the extra effort and calories.

When I saw these Carrot Cake Cheesecake Cupcakes from Crazy for Crust, I knew it was one of those recipes.  Usually I tend towards all things chocolate, but the carrot and cream cheese combination appealed to me instantly and I knew it was something I had to make.  I have been waiting for an excuse to attempt them and this week I finally found my reason.

Tommorow, my good friend Linda from playgroup will be undergoing surgery on her knees to help with the back issues she has been having.  She will be missing out on the fun and treats for our Halloween party next week and won’t be back to playgroup for several weeks, so I wanted to do something special for her.  I recall a discussion where she told me of her love of cream cheese icing and how she has even gone so far as to eat it by the spoonful directly from the container.  Whipping up a batch of icing would have been much simpler, but I figured these carrot cake cheesecake cupcakes would make a pretty tasty vehicle for the cream cheese icing!  I was not disappointed. 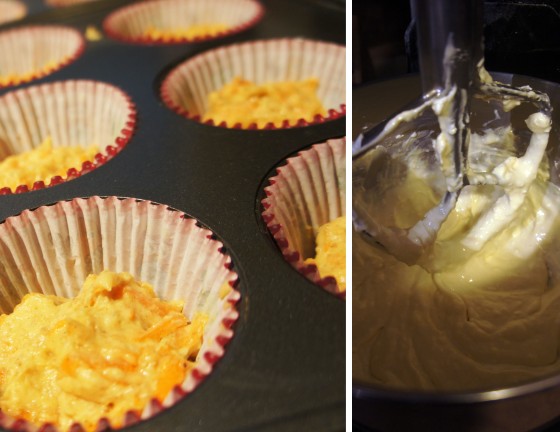 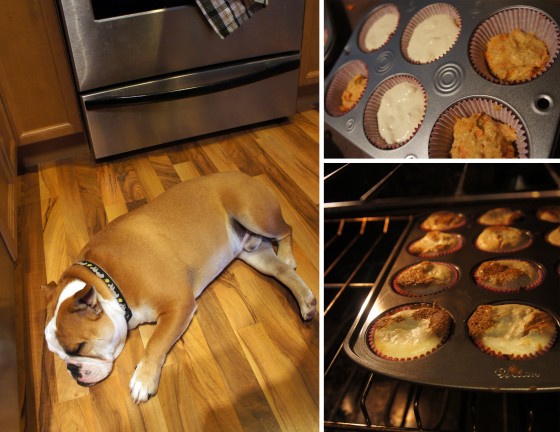 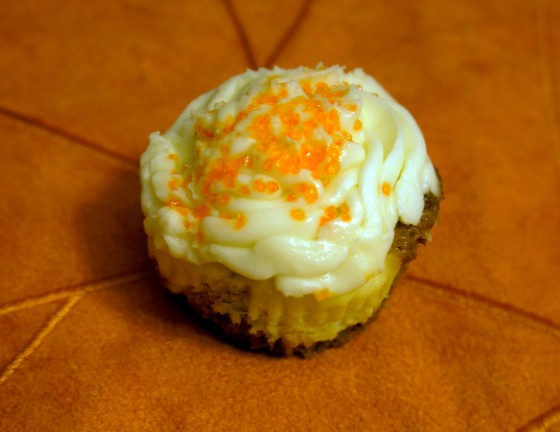 I brought enough to share with the other ladies at playgroup, and packaged up a few extras for Linda to take home with her. 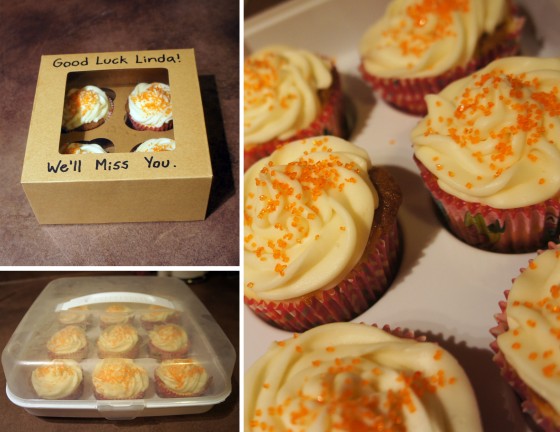 The recipe has a few steps, but it is fairly simple and straightforward.  I doubled the quantities which meant it required 4 whole bricks of cream cheese between the cheesecake layer and the icing.  While I was happy to be able to buy my cream cheese in bulk at Costco, I am now at a loss about what to do with the remainder of my giant bag of Costco carrots.  At only $5 for the bag, dealing with 10 lbs of carrots seemed much easier then having to make a stop at a second grocery store with kids in tow.

Please feel free to share your best carrot recipes in the comments below!

My mom just retired from teaching this past spring.  I spoke to her recently and she told me that with September quick approaching she has had a few moments of anxiety over having to go back to school/work, and has had to remind herself that she is retired!

We celebrated her retirement with a small family party and I was put in charge of cupcakes.  It only seemed appropriate to make apple cupcakes so I made these simple cupcakes using gummy leaves and pretzel sticks for the stems.

They turned out very cute and would be a quick treat to whip up for the first day of school or any other time you want to show your favourite teacher how much you appreciate their hard work.  For mine, I did a cherry chip cake with cherry frosting, but you could do almost any cake flavor with red icing. 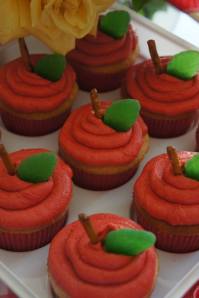 You might also notice they are in the dollar store cupcake carriers I have mentioned before which would make it easy for gift giving!

I decided to bake up some quick cupcakes earlier this week for the human members of our family to enjoy on the dog’s birthday.   They weren’t supposed to be anything spectacular, but they turned out so tasty I just had to share.

For the cake part, I just used a Mrs.Fields boxed cupcake mix from Dollar Tree.  I absolutely love these mixes and try to keep one chocolate and one vanilla on hand at all times.  They make one dozen cupcakes versus the 24 cupcakes you usually get from a standard boxed cake mix – perfect for our family of four.  The liners and cupcake toppers were a kit I found at Dollarama and had sitting around in the pantry.  The multicolored sprinkles were my 3 year old son’s addition. 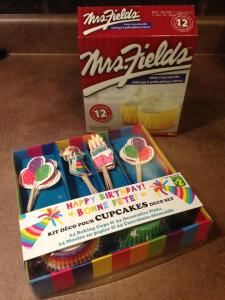 Because we had just gone berry picking the day before and I had a bunch of fresh raspberries, I thought why not add them to the buttercream icing.  After a quick google search I came up with this frosting recipe from myrecipes.com.  It whipped up quickly and tasted amazing!  It was just the right amount of sweet and tart, with a pretty pink hue.  I enjoyed it so much I may just have to make it again for my birthday in a few weeks!

2. Gradually add the icing sugar, blending in slowly after each addition.

BONUS FAVORITE  Since we are on the topic of Dollar stores and cupcakes, I thought I would share one more favorite – these awesome cupcake carriers I have found at both Dollarama and Dollar Tree.  I always struggle to find a way to store my cupcakes at home or take them to events so these are perfect.  At only a couple dollars each they are a lot cheaper then a lot of other versions, and I feel like I could afford to lose or leave them behind without being too heartbroken.  I only wish they had them for mini cupcakes!

(I was going to take a picture with cupcakes in it but by the time I thought of it, the cupcakes were long gone!  They were that good.)